Other than my first bike, The Low RIDER, which is also a trike, all my other rides are quads. The Low Rider has had the fewest breakdowns, and remains one of the most reliable and stable rides in my fleet. It’s more than eight years old, however, and I wanted a more modern version. I took the Low Rider’s design into consideration when configuring the Low Glider in the hopes that it, too, will be one of the most dependable. Since the Low Rider was built, the capabilities for the machine shop I work with have grown extensively. [Utah Trikes] That growth enables us to create and produce custom dog rails and attachment points.

The Low Glider’s minimalist design means it does not have some of the features I have grown accustomed to on my modern bikes such as the ability to carry a large amount of water for the dogs, cameras, and back-up gear (e.g. rain suits and warmer clothing). The design of the bike doesn’t work as well for a larger rack, so instead of leaving it to the fabricator, we decided to build it internally. That’s a small downside to the more sophisticated design, but we’ll get it done.

The Low Glider boasts one of the newest electronic motors, the Bafang, [http://www.szbaf.com/] which has a good amount of power at 1000 watts. The Bafang will be helpful because with two people, the four dogs don’t contribute much to climbing hills. We also stepped up to a brand new battery, The Shark Pack [http://www.sharkclean.com/parts/tag/46/batteries], which is assembled by LUNA Cycles [http://lunacycle.com/]. Like our other batteries, it’s a lithium ion, but the Shark Pack has a lot more amp hours, and has better ratings than the previous batteries (which were already pretty good). I am excited to see how these improvements will affect performance, longevity, and power bursts on the trail.

Both the captain/driver and passenger can peddle the Low Glider independently or together. This will be a great feature if the motor gives out when climbing a hill, and to avoid straining the motor too much. The motor has a built-in cut-off for when it gets too hot, but if the cut-off doesn’t work, or if something else fails both riders can pedal to make it up the hill. There are times when you can see a small hill coming up ahead and sometimes you can gain momentum to get up it, but if you don’t see the hill in time, or a dog stops, it’s good to have the ability to pedal. It’s also a great feature if you have a passenger, like a child, who can’t pedal. The second set of pedals won’t go around if only one person is riding.

We also considered gearing when building the Low Glider. Most bike riders want top-end speed, but we need torque and climbing ability. Our top speed is limited by the dogs who go about 15mph at the top end, although the bike could go 40mph—there’s always a trade-off. If you want top-end speed you have to gear the bike higher, but for torque (or pulling power) you want to gear it lower. The lower gears help us handle hills and rugged terrain.

The Low Gilder is fluorescent yellow. I like to use bright colors not only because they look so cool, but also so we are visible to other riders and people on the trail. We’ve taken the Low Glider for two or three runs, and it’s been performing very well. I named it after the Low Rider because this bike has almost the same footprint, but with the new concise design, it is so light. The first bike was steel, and the Low Glider is aluminum. It’s a design that the dogs can really pull, and it moves a lot better. 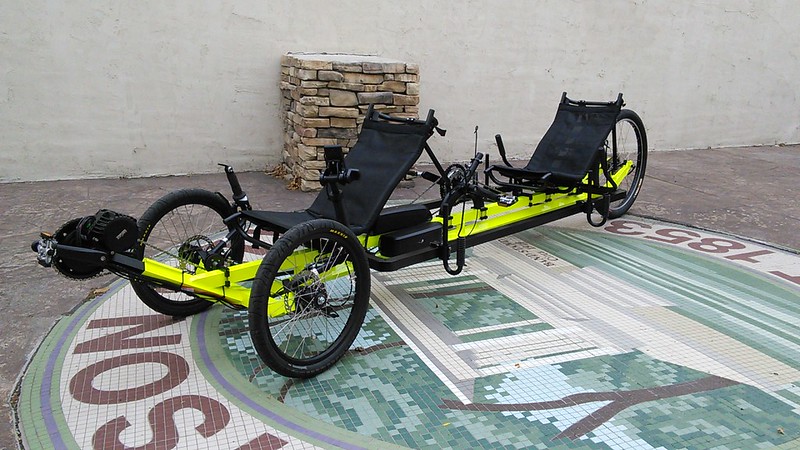