This bike is a monster. It has large orange tires, and it’s one of the only ones built that has a totally custom frame. I like being loud and trying new things and these tires are original and cool, but they do fade some. They still have a sort of a pink salmon look, but they’re not as bright as when I first got the bike.

This bike is a recumbent tandem quad, and because of the tires, it sits higher. The tires are big and fat, which give it a super comfy ride. Despite its size, it’s very narrow—the narrowest of the fleet at 32 inches. The guy who built it was doing it as an experiment. It’s a good design for us because some trails are also pretty narrow. We often come upon gates with limited space for us to pass through. The rule of thumb is that gates are supposed to be 36 inches, but we’ve come across some that are under that size. Our bikes are usually 36 inches, and they’re even wider with the dogs. The dogs know to get as close as possible to squeeze through, but this narrow design of this bike really helps.

This bike has motorcycle style handlebars, and it is a little more equipped than the Low Glider and Woof’s Big Wheel. It’s not as streamlined and has more components, such as a fancy bike rack built on the back that the bike builder got creative with. It has lots of interesting curves and is truly a piece of art that’s integrated right into the bike. It’s almost a shame to put anything on it to cover it up!

This bike came with a 750 watt Bafang motor and uses the old lithium battery design, but it’s powerful enough for us.

The bike is about a year older than our newest bikes in the fleet, and the weakest link on this one is the front tire assembly, which has broken on us twice. The spindle that holds the tires into the steering mechanism are not designed well (CATT Trike is the original manufacturer), and they were actually recalled. The best I can put together is that because they are aluminum rather than steel, they aren’t as strong. Most riders want their bikes to be as light as possible so they can go faster and there is less to pedal, but people go a little overboard and tinker with the smallest amount of weight they can to achieve their end goal of speed. When the spindles were made from steel they were much more sturdy. The spindles are a pressure point because there is weight on the steering axle system, and since aluminum is a softer metal they can break easily. When I first put the bike to the test we went through some pretty rugged terrain. It was so comfy, but the hill we were traversing had us so the two left wheels were lower than the right and the front wheel just broke off.

The dogs’ safety is always our utmost concern. After contacting the builder who told us it was a flaw in the design, it happened again, but this time we noticed the wheel coming loose and we stopped before it could come off. We still had to switch bikes and haul this one back, which was a nightmare. We called the manufacturer again and told them they need a better design, but we are still in a quagmire. We have the old steel style spindles in one of the other single bikes in the fleet and we might try swapping them out since the single bike is lighter and the aluminum spindle might work fine on it. This is a mass produced product, but we’re using it in a diff way, which is part of the challenge. It’s unfortunate because the bike is so great, but we haven’t been able to log too many hours on it.

This ride is one of the coolest looking bikes because it’s metallic sky blue with the cool orange tires. The real gem about this bike is how narrow it is, although it’s slightly less comfortable to drive. My legs aren’t pinched together, but because my feet pronate, it’s a little more trying on me, especially when I’m on there for 4 or 5 hours, but the passenger loves it—it’s like sitting on the living room sofa. The passenger on this bike has pedals and breaks, which helps make them feel empowered. It’s also good to have the help with braking when needed, and if the passenger sees something the driver might not, like during night rides. 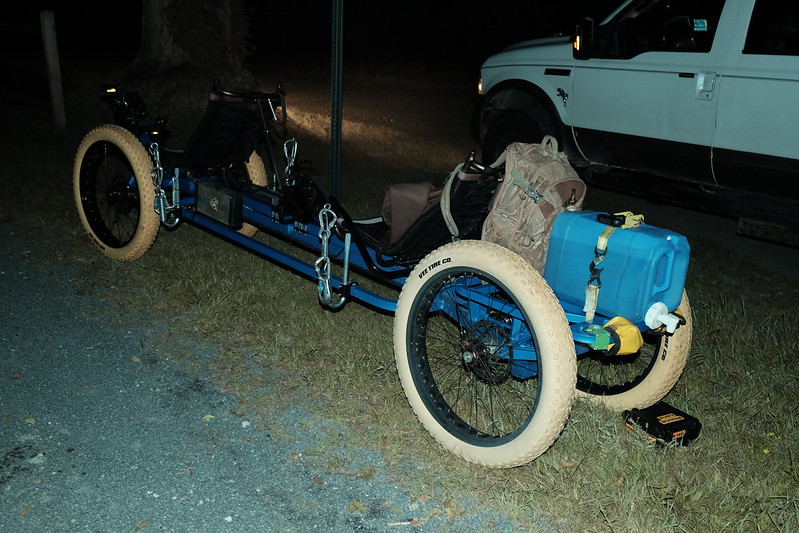