Woof’s Big Wheels is named after the Big Wheels from my childhood. This bike looks a lot like the Big Wheel except this trike has two wheels in front and one in the back, rather than the other way around. It’s the second single seater, the third trike, and the only single seater trike in our fleet of bikes. The other single seater is a quad and it’s heavier, so I am hoping this bike will have the added bonus of lightness and reliability.

Woof’s Big Wheel is built similarly to the Low Glider in that the components are minimal, but this one has fat wheels. The fat wheels are good for going over diverse terrain, and they are much more cushiony and comfortable. You can let some air out of the tires to really absorb the ride.

This bike has a real rugged look. We adapted it in the back to have a more conventional bike rack like those that can be found on many two wheel bikes, which we use to hold water and other essentials. We still need to haul the same amount of water for the dogs, but since it’s just a one-person ride the rack only has to hold a few supplies.

I would recommend this bike because it’s probably the least expensive custom ride. It’s a good bike for almost anyone who wants to get involved with dogs and urban mushing due to its lightweight design and comfort. It’s recumbent and offers the same features as most other bikes, but it’s more simple and compact.
Woof’s Big Wheel is painted Granny Smith apple green and has customized dog rails that keep the dogs nicely spaced away from the bike. The rails also provide a good way for us to put custom dog attachments. We can slide them to put the dogs closer or further apart, since they are not welded.

Woof’s Big Wheel has the Bafang motor, which will pretty much let me get up Mt. Everest since it’s a single-rider. It has a lot of torque to it. The handle bar assembly is a little different because your palms are facing down, whereas on most bikes you hold your hands so your palms are vertical to the ground. This feature is neither good nor bad, but it is nice to have that different feel.
The back of the bike is rather narrow, so the dog rails extend two feet past the rear tire. This provides space if we want to modify it with steel or fabric for more storage. 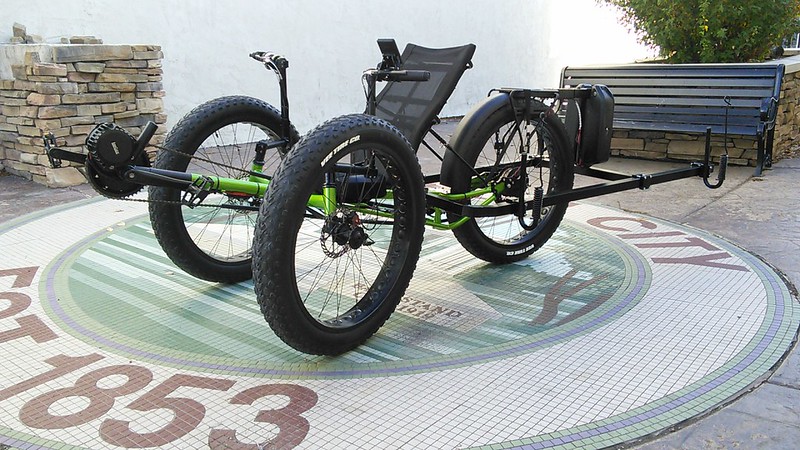